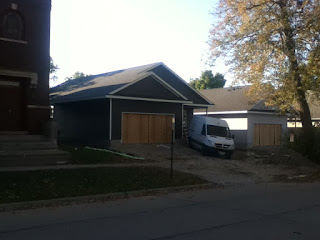 Oak Hill Jackson is a historic neighborhood located south of downtown Cedar Rapids. Through most of the 20th century it was home to many of our town's African-American citizens and several thriving congregations. It's in a low-lying area near the river, and suffered considerable damage in the 2008 flood.

Now Oak Hill Jackson stands to benefit from its proximity to the burgeoning New Bohemia commercial and residential district. How the process of gentrification will play out here remains to be seen, but some infill housing construction has begun. I was rather shocked to see two houses going up on 9th Avenue, next to the historic church that now houses New Jerusalem Church of God, with garages in front. This anti-social design has been widely derided. Andres Duany and his co-authors, in Suburban Nation (North Point Press, 2000) say garage-front houses work against traditional neighborhoods in two ways: removing the "eyes on the street" that make streets feel safe to walk, and removing the signs of human presence and activity that make neighborhoods interesting and thus desirable to walk.

So why is this style of house still being built? And why in this historic neighborhood? Could a form-based code prevent this?
- October 16, 2016

The Future of Downtown Cedar Rapids

Bullish views of downtown Cedar Rapids were expressed by a public-private partnership of a panel Tuesday morning, sponsored by the Cedar R... 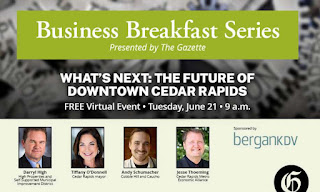 A blog about our common life

They shall neither hurt nor destroy in all my holy mountain--ISAIAH 11:9a

I am a Christian, a Hindu, a Muslim, and a Jew.--MOHANDAS K. GANDHI

And the streets of the city shall be full of boys and girls playing in the streets--ZECHARIAH 8:5

NOTE: The perspectives herein are solely the author's, and not those of Coe College, or any other organization of which he is a member.

Bruce Nesmith
I am a teacher of political science, a husband, a father of young men, and a seeker after God. Ben Kaplan and I founded Corridor Urbanism in 2015; Phillip Platz is an honorary co-founder.